Having had anxiety for years himself, Dr. Russell Kennedy certainly knows what it’s like to suffer from such a debilitating mental health condition.

Dr. Kennedy’s anxiety began as a result of growing up in a tumultuous home where his father dealt with schizophrenia and bipolar illnesses.

By the time he reached 12 years old, Dr. Kennedy vowed to use his experiences to make a difference in other people’s lives, which ultimately led him to pursue becoming a doctor and having a mission of saving others from the pain he had endured for many years.

Realizing that quite often those who suffer from anxiety affect others around them, Dr. Kennedy recognized this was his situation. His entire family was devastated by his dad’s illness.

And in an attempt to alleviate his own anxiety, Dr. Kennedy sought out traditional methods in psychology and psychiatry with none eliminating much of the anguish.

He then looked to non-traditional, more ethereal modalities, some of which he learned about during his time living in a temple in India, along with psychedelics such as LSD, MDMA, Psilocybin, and Ayahuasca.

While experimenting with these other sources, in safe and supervised environments, he realized there could be some healing found within these resources if channeled appropriately.

Today, Dr. Russell Kennedy has used both his experiences and his knowledge to become an anxiety specialist. What has allowed him to make such a tremendous impact in helping other individuals dealing with issues relating to anxiety and chronic worry is his ability to effectively empathize with his patients.

Dr. Kennedy is a neuroscientist and medical doctor who graduated from the University of Western Ontario and is the author of the award-winning book, Anxiety Rx: A New Prescription for Anxiety Relief from the Doctor Who Created It, available on Amazon and Audible.

He also has Master’s level training in Developmental Psychology from the Neufeld Institute, and is a corporate speaker, and a certified yoga and meditation teacher (RYT-200).

Additionally, Dr. Kennedy, widely known as The Anxiety MD, has been a stand-up comedian since 2000, one attribute that most certainly sets him apart from other MDs and one might imagine to enable him to have a highly adored bedside manner and entertaining and informative speaker. 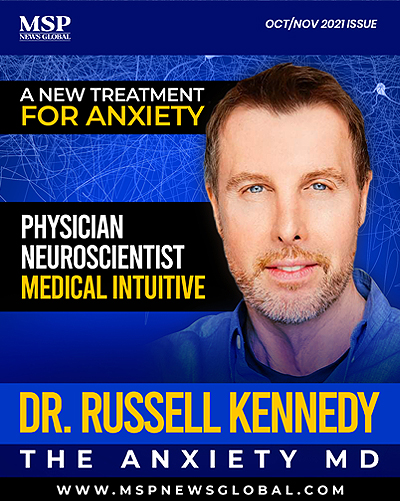 Since beginning his practice, Dr. Kennedy has compiled his experiences, knowledge, and research to develop several courses and techniques designed to help individuals move forward in their healing journeys including a fascinating online presence on YouTube that covers multiple topics in mental health.

As a doctor who realizes that anxiety may stem from a myriad of issues, Dr. Kennedy has identified that most worry stems from unresolved childhood trauma. And no one can relate to this more than he can.

While it is important to seek guidance from a knowledgeable doctor, the benefit of seeking care from Dr. Kennedy is that he has pursued healing remedies of all types and can solve these issues from all angles with a variety of calming, yet powerful approaches.

In the past year and a half, the world has offered everything but normal.

In fact, it could be argued that the state of the world is the root cause for many people’s anxiety as fear regarding a sense of normalcy returning seems far off in the distance.

It is Dr. Kennedy’s wish for individuals to consider alternate possibilities for healing and solace.

With an open mind and believing that new methods will work when old methods are clearly failing, the hope for finding a way out is truly available for those who are ready to take the next step.