Along with creating phenomenal music, Peter Stelling inspires other brilliant artists to follow their true purpose with his extraordinary journey.

We humans have been making music since the ancient period. Music has the power to mend our hearts, make us forget what is hurting us, and even help us improve our cognitive performance! Music is not bound by a particular language or region. It knows no age and inspires each and every individual. It motivates us in ways that words fail to do at times. And it is a true gift to people who can make us feel this way with their music. Even still, we listen to great artists like Mozart and Beethoven. This is because their creativity entices us and takes us to a different world. An artist of such calibre is Peter Stelling, who has been creating music since elementary school.

The singer-songwriter has always felt delighted to connect with different musicians, composers, and creative individuals. Peter feels that music is a universal language and knows no bound. It helps people express their emotions and be their true selves! 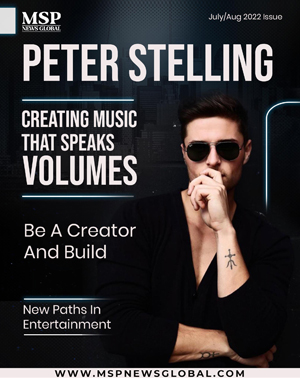 To get to where he is now, Peter had to overcome numerous obstacles. At the start of his career, Peter had little to no equipment, but it didn’t stop him from pursuing his dream of making great music. To create his music he had to get the help of close friends and other eager artists. The idea of creating a new song with other artists and talented people gave him a reason to keep pursuing music and push for what he loved doing. Every day, Peter would work hard to compose music that would interest his audience. Spending a lot of time to himself trying to discover the direction of where his life was headed, and the person he wanted to become in the process. With so many influences around him, it became difficult to figure out what his own influence would be and how he wanted to make a difference in the world in his own way.

Now, Peter motivates other artists to create the music they are truly passionate about. He believes that music has the power to transform people’s perspectives around the world.

Peter is not just a musician, but also an actor who has been cast in a Robby Johnson music video. He has also appeared in commercials and infomercials, as well as various roles in Florida entertainment.

Dreams For Other Artists

As a songwriter himself, Peter motivates artists to keep working toward their goals. Peter also assists stifled artists in rising above cultural expectations and demonstrating how their creativity has the power to shape the world.

Peter wants to provide equipment to other artists and offer a forum for them to communicate their voices. He wants to use his music to change people’s lives and provide a space where people may groove and reflect on their passions. Peter’s objective is to raise funds in low-income areas of Orlando and Tampa, Florida, for other brilliant musicians and groups who are unable to create music due to a lack of resources.

Music, according to Peter, is a universal gift that lets people escape painful situations and enjoy the positive ones. He considers that people should be welcomed to write, sing, and recognize their artistic side at all times. In the end, Peter says that “Music is a safe space for anyone. There are so many different genres, phrases, melodies, sounds, and styles that make music endless.”