International best-sellers The Secret, and The Secret Book Series: The Power, The Magic, and Hero, sparked a global movement, guiding individuals to visualize and speak into existence their deepest desires to bring them to fruition.

Those who are captivated by the philosophy behind The Secret, are in for another magnificent journey of discovering the ultimate secrets for ending suffering and finding lasting happiness. Rhonda Byrne, recognized as one of the world’s most influential people in TIME magazine’s “The TIME 100: The People Who Shape Our World” and creator of the worldwide phenomenon has done it again!

The Greatest Secret promises to spellbind, and encourage readers to look beyond the material world and into the spiritual realm, where all possibilities exist! 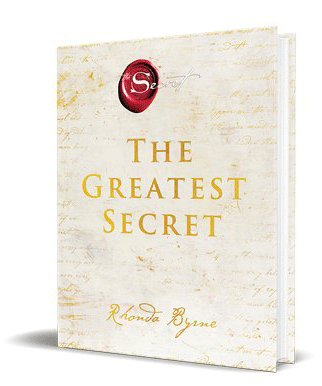 Scientists have confirmed that every thought is made up of energy and has its own unique frequency. When the energy and frequency of a single thought radiates out into the Universe it naturally interacts with the material world.

As one’s thoughts radiate, they also attract energy and frequencies of like thoughts, objects, and even people, drawing them back in. Simply put, thoughts become things.

It has been said, that in ancient times secrets were often hidden in plain sight where no one would think to look for them. Here on earth billions of people have searched for the truth about how to live in a permanent space of pure bliss but very few have actually discovered it.

Most individuals have suppressed the natural happiness they are born with early on and have been in search of the secret ever since. Many times, individuals are just not consistently happy because they are unconsciously covering it up.

But is there really a secret that leads to a path where suffering no longer exists? YES!!

As Rhonda shares in The Greatest Secret, everlasting happiness is not found in the tangible, it is found in the spiritual, and it is LIFE-CHANGING! The book reveals the most remarkable revelation one can ever make and explains how each and every person can let go of negativity, problems, and anything unwanted and replace them with a life of permanent happiness and an abundance of joy.

A regular practice that Rhonda shares in The Greatest Secret is to avoid suppressing negative energy but instead to welcome it. As she explains, an individual should not engage with negative energy but should observe it, embrace its place, and then watch as it evaporates.

It is only then that one can truly free themselves from the harmful effects negativity can have. Once an individual learns how to let go of harmful, negative thinking what will happen will feel like a wellspring of jubilation.

The Greatest Secret also will guide its readers to appreciate the value of beliefs, but advise not to mistake them for truths. Otherwise, they may turn into limiting beliefs. This enlightening book will restore one’s natural euphoria and inside The Greatest Secret readers will find:

A world of contentment, peace, and harmony awaits. Experience a new awakening in The Greatest Secret!